eShop Multi-Currencies plugin for WordPress gives you the ability to offer multiple currencies to your visitors. Select from over 165 currencies and display your chosen ones via a widget or shortcode. eShop’s default currency settings (base currency and base currency symbol) are moved to the new Currencies tab under eShop -> Settings, where you can also select whether to fetch exchange rates via OpenExchangeRates.org. Display allowed currencies using either a shortcode or a widget.

Once you activate this plugin, a new Tab is shown under Settings -> eShop -> Currencies.

The new currencies tab on the far right.

You will also find that the currency symbol and currency options that were originally under ‘General’ and ‘Merchant Gateways’ tabs, respectively, have been moved to the new tab under the ‘eShop Base Currency’ box.

In addition to those two items, you can also select to have the plugin always send the base currency to the merchant gateway, or whatever currency the client has selected. CAVEAT: This is a potentially dangerous option, depending on the merchant gateway. Potential issues include failed transaction due to currency not accepted by the gateway, failed transaction due to given currency different from base currency without explicit acceptance in the gateway settings (outside of eShop), or even additional currency conversion fees. Make sure you know what you’re doing and test it out in a sandbox before using this option.

When dealing with multiple currencies, the system needs to know the exchange rates for each selected option. The plugin comes with integration with http://openexchangerates.org and instructions on how to get a free account. Due to performance reasons, exchange rates are not fetched in real time, but scheduled from hourly to monthly. You can also force the system to update on demand. 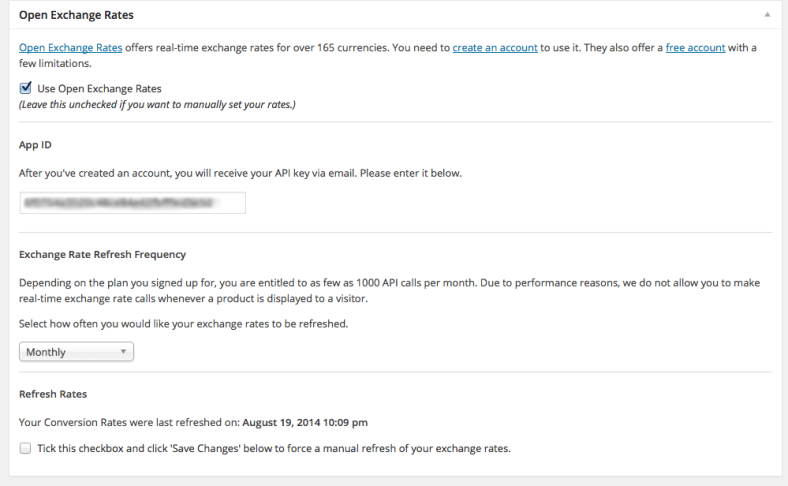 The next section is for the actual allowed currencies. Choose as many currencies as you want (remember to play by your Merchant Gateway’s rules), and set the name, symbol, conversion rate (if you’re not using OXR as that sets it for you). You can also adjust fixed rates and percentages if you feel you need to. If you want to deactivate a currency without actually removing it, just toggle the ‘Active’ checkbox.

To help you keep track of the currencies the sales have been made in (for those passing the non-base currency to the Merchant Gateways), All orders screens have been updated to display the 3-letter currency code instead of the base currency’s symbol.

Currency preference is kept via a cookie in your customer’s browser. When he completes the payment and opts to create an account, the preferred currency is stored and is viewable/modifiable under your customer’s profile screen.

You can place the currency selector drop-down anywhere you want by using the [emc-currency-selector] shortcode, or the special widget provided by the plugin. To add it directly to your theme, call

This plugin uses shortcode_exists(), which was added in WP 3.6. It has been tested with WP v4.1 and newer.

This plugin has been tested extensively. We do our best to provide as bug-free code as possible, but we cannot possibly test with all the different scenarios in the wild. If you find a bug, please let us know via our contact form.

We’d like to thank Triple Ace Games for helping fund this project. Feel free to pay them a visit as they have some pretty cool products :).